Alright so I'm writing this on the 3rd of Jan. So, reader, you can surmise that the partizan's advent was a little bit of a failure in terms of being able to write every day. But it was very much an experiment and I've likely learned a lot. What that lot is, however, I will have to think on some.

So, if you will let me transport you back to the dark days of December, back, back... Way back to the 17th... When I had a total god fucker of a hangover. You know one of those when you wake up knowing you've done something severe but aren't quite sure what. All you have is a terrible feeling of guilt, broken nails and a bastard behind the eyes.

Yes at that point there was no way I was drinking a 17.5% turbo yeast beer. Nuh uh, not me! So I blobbed and just went to work and felt like a twat all evening.

Rejuvenated by a whole 5 days off in two weeks I'm ready to wrestle the demon. Not even the nagging cold I developed (on Christmas fucking eve!) is going to stop me now. Actually, like the cask strength malt I was drinking last night I'm hoping that this will actually get rid of the cold and fortify me ready for a shit arse January. We'll see.

I've tried this beer before, but never on its own - just when it's popped up in a session when Andy has been in the bar that's how we roll over here:). It's a bruiser for sure but fuck the alcohol, especially as I can't really taste that much alcohol except that warmth in the chest that we got in the Milou. Very pleasant. My immediate impression of this is sherry - Pedro Ximenez to be prescise. It doesn't have the thickness of PX but many of the nutty, fruity and slightly bitter characteristics.

There's a touch of smoke and vanilla that works a treat and with the sherry-ness this beer, more than any other, is the one that you could peg as a barley wine. It's as good as any beer I've tried of this strength, and there are few so there's some more praise to pile on the praise pile for the Partizans advent calendar.

Perhaps I should take heart from yr man Goethe

Hail him, who keeps a steadfast mind!
Thou, else, dost well the devil-nature wear:
Naught so insipid in the world I find
As is a devil in despair. 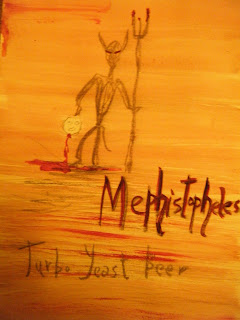