Stagger do! My Visit to Fraserburgh to brew something NEW

You may or may not know and perhaps care even less, but I've recently tied the knot! It was brillant actually and wholeheartedly recommend it to all of you!!!

So of course it was my stag do a few weeks back and rather than going go-karting or some other nonsense we decided to pay a visit to the chaps at brewdog where Brewdog's Emperor Penguin had invited us to try our hand at brewing. How good was it? FUCKING BRILLIANT! The guys up there are fantastic and incredibly hospitable. It was, despite my somewhat accelerated state of stag do 'refreshment' a really great insight in to what goes on at this now world famous brewery and what makes it utterly special. 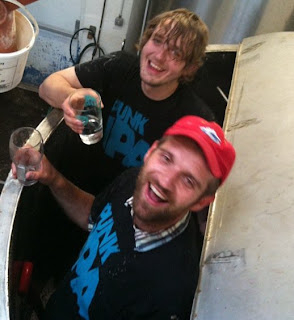 It was pretty damn interesting for me to feel the atmosphere of the brewery and to meet the brewers and workers - there's a great collegiate kinda feeling with young brewers from around the world as well as local lads doing what must be one of the hardest and most fun jobs you can do! Brewdog have a great background in collaboration with the likes of Three Floyds and Mikkeler - the gypsy brewer, it's the way it should be and I congratulate James and Martin for fortering this kind of atmostphere.

Frazerburgh is one hell of a place, right on the very edge of Scotland, stuck right out in to the North Sea. It's a place of extremes. Extremes that I discovered whilst camping in the most unsheltered campsite in the UNIVERSE and I didn't feel so fucking clever at 4am in the morning, clutching a bottle of Sink the Bismark while my tent whipped around me in the salty lashing rain, 'you should have pegged it in properly' I hear you say... No that campsite is the devils own work, don't go there in Winter, you'll die.
It makes sense that what's made there is equally extreme and Brewdog have made such an impact on the UK scene, they've ruffled plenty of feathers and in the process have created some beers of true brilliance. Several of which I sampled, regularly, throughout the weekend... In particular we drank a shed load of 5am saint right from the tank.
I was pretty lucky to try a brand new IPA made Bramling cross hops which was bang on. Bramling is a British hop with a distinctly American aroma but a brilliant British fruity taste. The beer is cracking and has a juicy traditional IPA roundness, coupled with a great level of bitterness and a salty bite - this in particular is intriguing and something I've only really noticed in a couple of beers before now. I love it. Is it something to do with brewing with the North Sea literally at your back door? Is it something to do with my tastebuds being fucked after the weekend?
We're just about to put on our creation at North Bar. It's named Alice Porter in honour of my wife (her maiden name) and of course it's a porter! It's 6.2% and smooth as hell, we used alot of the aforementioned Bramling cross as well as a great hop called sorachi. The idea was essentially to brew something pretty stout but use the fruit of the Bramling and the lemony-ness of the sorachi to add that porter tang! It's worked and has produced a highly quaffable beverage along the lines. If you can't get down to North over the next month or so then you may find it at Further North or the Marble Arch in Manchester. A small amount has also been released in London and Aberdeen under the name 'Santa doesn't exist'.
So there you go - ace eh. I must credit the brewers with the creation of the beer - we picked hops and malt and did a load of donkey work, those guys are amazing and I'm looking forward to seeing them at North so I can return the favour... So to speak... 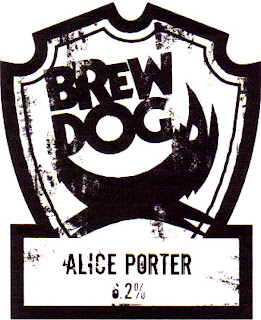